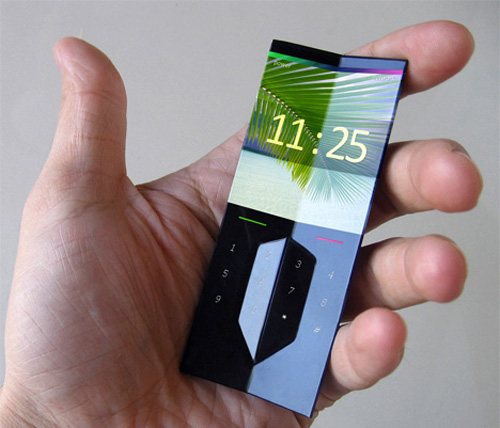 Modern smartphones can be considered as the most technologically advanced and innovative products on the market. In contrast to PCs, their functionality is constantly taking on new opportunities, and they are becoming more accessible and more enjoyable to use. What is the future of smartphones?

For many years, the gadgets developers don’t have new decisions on how to teach smartphones to identify users quickly and efficiently. In fact, nothing new since the use of a simple password has appeared: fingerprint sensors (due to their high cost and not always perfect work) have not gained great popularity. But it does not mean that there are no ideas in the industry.

It is most likely that in a few years all smartphones will learn to distinguish features of the owner’s retina. Apple is working hard to ensure that the new iPhone will get a fingerprint sensor, and some manufacturers are hoping to introduce the voice identification of the user. The first such phone – Baidu-Lenovo A586 – is already sold in China.

Smartphones are desperate for new ways to transfer quickly large amount of data. Samsung has recently tested the new technology of wireless network data transmission, which provides a bandwidth of 10 Gb / s.

Technical limit of technology today is only 75 Mbit / s. Samsung promises to begin deploying 5G-network in Korea as early as 2020. The company promises that the new technology will allow you to download movies in just a few seconds.

Although smartphones today can hardly be called inhibitory crafts, in future they may become real digital monsters. Intel has said that very soon, in five or ten years, they will have a 48-core processor for smartphones and tablets. This, of course, will give users new possibilities on the part of mobile entertainment and consumption of high-quality multimedia content.

It is clear that with the 5G-module and a 48-core processor usual capacity of the battery may last only for 10-20 seconds.

Obviously, there will be new batteries. Japanese engineers have been working with semiconductor manufacturer ROHM, Aquafairy and Kyoto University on batteries that are generating a lot of energy from hydrogen.

The University of Illinois scientists claim that they are developing lithium-ion microbatteries which maintaining the standard size battery will increase their capacity to 2,000 times. Battery charging will be a thousand times faster. Such batteries should appear as early as 2018.

High hopes of gadget makers are also connected with flexible screens. It is assumed that the displays of future will be not only a “crush” and curl in different directions, but also will contain controls menu.

Meanwhile none of the manufacturers name the specific data of the emergence of devices with flexible displays, but LG, for example, has presented a prototype of a 5-inch flexible display, scratch-resistant.

Amazon is working on a smartphone with 3D TV which creates the effect of surround video without special glasses. Three-dimensional interfaces, in case of mobile gadgets, might not have much sense, but they are certainly impressive.

Amazon will follow the same pricing as in the case of the Kindle, the gadget will definitely be a commercial success. 3D-screens with the filing of Korean vendors will definitely become the new standard in gadget industry.

NFC technology, allowing devices to communicate only when they are in close proximity to each other, have a great potential, especially in the field of non-cash payments.

Popularization of the technology, however, is neither good nor bad, and mobile wallets still have not replaced the real ones. But the fact that in five to ten years mobile will replace plastic cards, the keys to the hotel room and your own home, no doubt is clearly necessary.