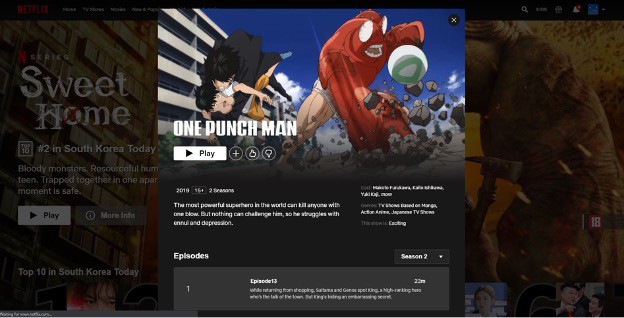 Who would’ve thought that a show with such a simple premise (bald guy has god mode cheat as a superpower) could be so addicting? When you first hear about One Punch Man, it doesn’t sound like much. But there’s a reason why the anime is so popular – the story is simply amazing, the humor is on point, and all the characters are enjoyable.

Many of you probably watched the first season on Netflix and were left wondering when season two will come out. Well, it already did – in 2019.

Wait – what? So why didn’t you see it on Netflix? Isn’t it on the site?

It is, but there’s a problem – Netflix can only stream the second season of One Punch Man in a few countries due to licensing agreements. We’ll show you which ones in this article. We’ll also tell you how to quickly unblock and watch this season.

Where Is One Punch Man (Season 2) Available on Netflix?

There are many online tools you can use to check that. We decided to use StreamCatcher (see more about it by following that link), an online Netflix check-up tool from ProPrivacy. According to it, you can only watch the second season of this anime in South Korea and India.

Keep in mind that the information can be different if you’ll check the availability of this season in, let’s say, one or two months. The devs constantly update this tool, and Netflix content availability also changes pretty often.

But, at the moment, we ran multiple tests, and can confirm that StreamCatcher is right with this claim.

Quite the letdown, right? After all, you can use Netflix in 190+ countries, yet you can only watch this anime on the platform in two places.

There are multiple unblocking methods you can try. In our experience, VPNs offer the best experience (at least for this particular show). They might seem like complicated tools, but that’s not the case at all. Here’s what you need to do:

And that’s about it. We told you it’s a very simple process.

What Should a VPN Offer to Ensure You Get Enjoyable Streaming?

When picking the best VPN for Netflix, what do you need to focus on to make sure you’ll not only be able to unblock the second season of One Punch Man, but also have fun doing it?

Here’s what we generally pay attention to:

The bigger the better in this case. If a VPN has 1,000-2,000 servers or more, you’ll have no problem finding one that’s not overcrowded and is also close to your location (so that you’ll get better speeds).

Plus, with more servers, you’ll be able to unblock more content on Netflix.

Unlimited bandwidth is a must. Having to always check how much data you used before you play the next episode gets tedious fast.

OpenVPN is always nice, but it might not be ideal in this case because it can be pretty slow. And many of you are already using a VPN server that’s pretty far (India and South Korea aren’t exactly close to Europe or North America), which already means you’ll get slower speeds.

So being able to use lightweight protocols that are faster than OpenVPN is really important. We’re talking about L2TP/IPSec, WireGuard (the fastest one according to our tests), and IKEv2. PPTP is also very fast, but we’d suggest avoiding it since it’s not safe to use.

Can You Watch One Punch Man (Season 2) with a Free VPN?

You can certainly try, but we wouldn’t recommend doing this.

Mostly because you’ll only get intermittent access. Netflix will likely detect that you’re using a VPN, and redirect you to the Netflix proxy error page. This happens because free VPNs don’t have the financial power to refresh their IPs very often. And since they don’t do that, they can’t avoid detection.

On the plus side, the second season isn’t very long (it has 12 episodes just like the first one). So you might be lucky and be able to watch it without encountering any issues. Then again, you might also end up seeing the Netflix proxy error just as the episode is getting to the part where you find out what the King Engine really does.

A pretty big gamble, if you ask us.

Other Drawbacks of Using a Free VPN

It’s pretty obvious that you’re much better off just buying a VPN – even if you’re only planning on using it to watch the second season of One Punch Man and nothing else. Just paying anywhere between $9 and $14 is better than dealing with all that hassle.

Which VPNs Did You Use to Unblock the Second Season of One Punch Man?

We told you our favorite providers, but we’re looking forward to hearing which ones you use. Also, if you know which VPNs can’t currently unblock this anime (or just don’t work with Netflix), we’d really appreciate it if you could mention them in the comments below.

Five Netflix TV Shows You Must See in 2017

As one of the most popular streaming services in the world, Netflix is doing a so much more than necessary to ensure that it...