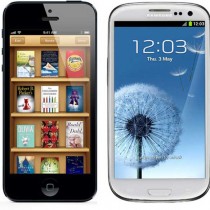 iPhones use Apple’s exclusive operating system – the iOS while Samsung is in collaboration with Google’s Android Operating System.  Apple’s iOS looks very different from the Android OS.  Android is being lauded for being fully customizable and user-friendly.  As for being user-friendly, the same can be said of the iOS .  Apple’s iOS isn’t that big on customization though.  What makes the iOS rock among the iPhone users is that is looks very elegant and neat – truly a mark of the posh Apple products.  Since Samsung has Android, of course all of the basic Google features are there – gmail, Google Maps, Youtube, Google Now, and Gtalk.  Since Apple has an independent OS, it allows its users to add whatever features they prefer.

The iPhone is popular for its durability.  Of course, the iPhone 5 stands true to this claim by its manufacturers.  The iPhone 5 is mostly made from steel and glass.  The Samsung S3, though it may be made from plastic, is made from only the best plastic materials.  The screen width of the S3 is 4.8” while that of the iPhone 5 is 4”.  The S3 has removable memory cards and can be upgraded.  iPhone 5 does not allow this feature.  If you want a lighter phone, then you should go for the iPhone 5, since it weighs 116 g compared to the S3’s 133 g weight.  There is also a significant difference between the processors –   iPhone 5 is in dual core while the S3 provides a smoother processing at quad core.  Battery life is both great.   It seems like Siri is the best in what she does.  Many are commenting on how all of the Samsung’s phone assistant could need a little more polishing.

The Audio, Video and Camera

Who wouldn’t love to use their phones for listening to music and watching videos?  Since the iPhone was conceptualized from the iPod, it provides the best audio experience to all of its users.  iTunes still remains to be the best music store.  It also comes with software that can help in organizing your entire musical collection.  Android will not be left behind with the different App stores that can provide you with a great musical experience too.  The S3 users have access to an audio system that has the combined features of iTunes, Pandora and Spotify.  The video quality of both phones are similar because of the superior screen resolution that both phones boast of.  You can watch Youtube videos and any other videos you fancy without your eyes getting hurt.   Though Samsung Galaxy S3 boasts of having the best camera among the Android phones, the iPhone 5 still has a better camera.  Apple’s flagship phone is definitely the best for taking pictures and making videos.  If there is something that both phones could tie on, it is on the recording capacity at 1080p.

The Apps and Games

Both of the App stores of Samsung Galaxy S3 and iPhone 5 have 700,000 apps to choose from.  This is enough proof that the Google Play store is clearly catching up with iTunes.  If you want the App store with the better quality, the iPhone 5 users have an edge.  Maybe this has something to do with the number of years that Apple have been running their App store.  Maybe the advantage that Google Play has over Apple’s App store is they allow their users to install the Apps manually in a computer and then just have it on the Samsung Galaxy S3 through the micro SD card.  This method is more flexible compared to iPhone 5’s style – having Apps installed from the phone alone. Whatever phone you decide to settle on, one thing is certain, both the iPhone 5 and the Samsung Galaxy S3 is great as a work phone for people on the go.  For this reason, more business telephone service providers such as AT&T have been reporting of an increase in their popularity.  Recently, more small businesses are availing of the RingCentral business telephone services because it allows a greater use of VoIP.  When you have access to VoIP, you don’t have to be confined in one physical setting.  You can work even when you are traveling or just chilling in the park.  Best of all, you smartphones can be transformed into a powerful business tool.  How cool is that?