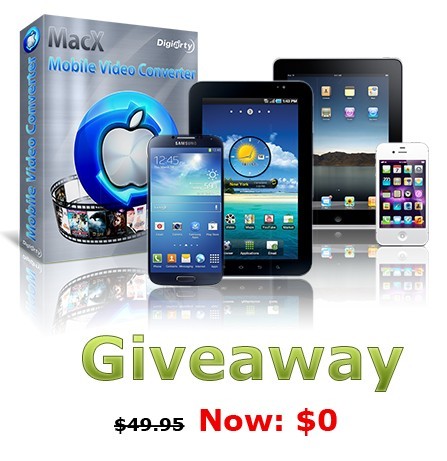 It’s often the case that the video content you play on your old gadget will not work on a new one. For instance, you cannot import the MOV video content that is playable on your iPhone 5 to your Samsung Galaxy S4. To make your videos shuttle through the crowd of mobiles and tablets without scruple, finding a professional video converter for your gadgets seems to be of great urgency. The newly developed MacX Mobile Video Converter will have your videos well digitized for all sorts of smartphones and tablets, ranging from Apple iPhone, iPad, iPod to Android Samsung, HTC, as well as WP8, Surface, Kindle Fire, PSP, etc.

One thing that needs to be mentioned is that this spick-and-span mobile video converter for Mac is now given away for FREE throughout the month of June 2013 to help mobile phone and tablet users get the optimal experience out of this software. So anyone who’s fond of converting video for your mobile devices should not hesitate to get this Mac mobile converter for free before the end of June on our Web forum. CLICK HERE FOR YOUR FREE LICENSE CODE

What’s more, its speed boost gets video to mobile conversion finished at super fast speed, up to 15x faster real-time conversion speed without sacrificing any video quality. You can also touch up your video at your disposal.