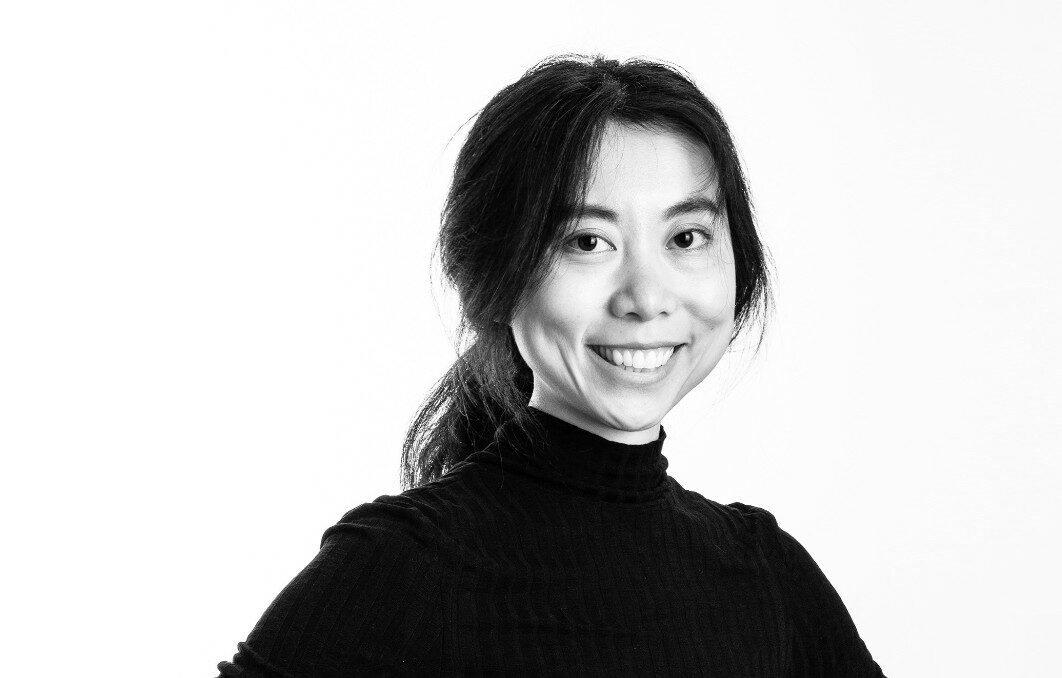 Designers and entrepreneurs alike can attest to the fact that there are times when a rebranding effort can make or break the way that a company’s target audience views an entire operation.

In particular, for B2B companies, i.e. companies providing products and/or services directly to other businesses, a rebrand can potentially aid all marketing and outreach in the near future.

While rebranding, to the average person, may seem like a superfluous exercise in vanity, the value created (or enhanced) by a successful rebrand can be immense.

Having worked for renowned design studios such as Leo Burnett, Astro Studios, and AKQA, Rong has proven time and again that she can more than handle major projects with far-reaching positive effects for clients.

Not to mention, Rong has worked in-house with Facebook and Apple as well, rounding out her impressive background.

But going back to the Zip rebrand project, any designers out there will already know that behind every rebrand, there’s a story.

If you want to learn how to help take a company through the redesign wilderness and emerge unscathed, then you’ll want to pay close attention. 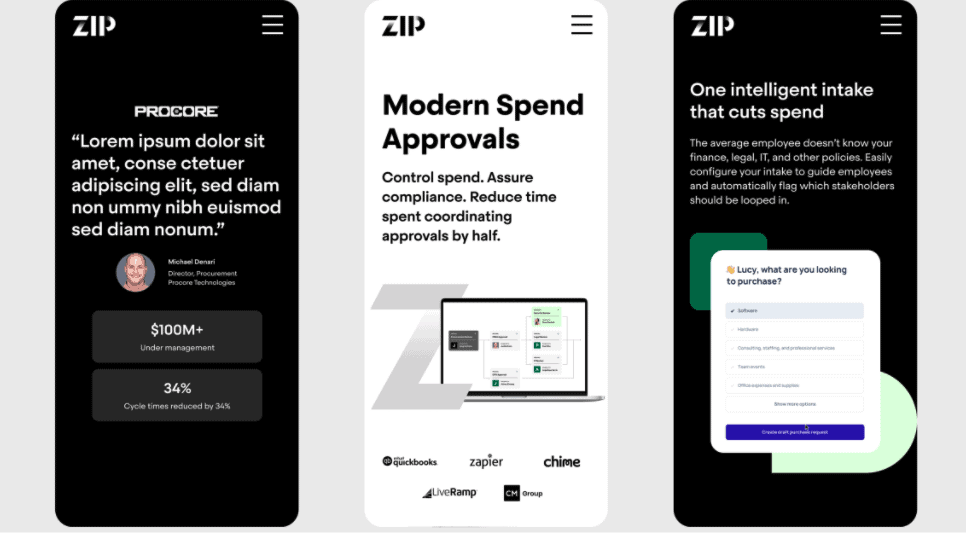 Spoiler alert: the Zip rebrand netted Rong an award during the San Francisco Design Week Awards, the premier gathering of the world’s most active design community.

“I led and designed the branding and UI system in only a month, along with the copywriter. I took a lot of input from the client and created the brand from the ground up, from naming to brand strategy to logo design, brand identity, and UI system. The branding speaks to the Zip story and their audience and also stands out from the competition.”

The SF Design Week Awards are an international competition that seeks to encourage thought leadership by supporting designers whose work can contribute toward a positive future.

Of course, the Zip rebrand win wasn’t Rong’s first award– far from it.

Rong has won multiple awards with different agencies over the years, including a win at the FWA (Favourite Website Awards) for the IBM Watson Health Web Experience project, completed with the agency AKQA.

“It’s always a great feeling to win awards, no matter how many we receive. Each award features a different aspect of design and they each have different impacts in different areas.”

Rong has worked with major design agencies such as AKQA (mentioned above), Astro Studios, and Leo Burnett, in addition to working in-house for Apple and Facebook. Some of her former clients include IBM, Delta Airline, Jiffy Lube, and New Relic.

Going into the Zip rebrand, all this experience was a huge asset, and we’re about to find out why.

It typically wouldn’t be advisable for a designer to take a client’s brief and simply set to work in isolation, trusting only in their design skills to steer the ship.

With rebrands especially, there are many different stakeholders who need to have at least some kind of input during the earliest stages of the process.

Communication is essential, but coordination then comes into play as well.

Various stakeholders may have different goals or even just different ways of expressing similar goals.

Or, a designer’s initial ideas and plans may conflict with those held by stakeholders.

When speaking specifically to design concepts, clients may not be especially well-versed in all the terminology typically used by designers to refer to specific styles and components of design work.

All of this is why the earliest step in the rebranding process is discussion.

In this case, Rong spoke with the Zip founders, in addition to forming her own initial ideas. She also performed extensive research of comparable companies.

“The approach was calculated and strategic. I researched the competitors and audiences and interviewed the Zip founders to align the project requirements. I provided multiple design directions to the clients, each with a very different look.”

Providing these options laid out several possible directions for the upcoming work.

The stakeholders in this situation had time to gather their impressions of each option and make an informed decision on which direction to take.

This cut down on surprises that might have occurred later on in the process of the lines of communication hadn’t been so strong.

Everyone involved was happy with the plans put in place, which is the best-case scenario for a designer.

Does that mean the Zip rebrand says absolutely everything about the company and that it always will? Well, no.

Rong understands that you can only do so much at any given time.

Using branding to limit the future developments of a company would be a mistake.

“Design is a never-ending process. For example, a brand or company is always growing and evolving. Designers continuously expand and flesh out the brand identity, even the mission statement.”

In terms of creating an initial offering of different options for the stakeholders to choose from, Rong definitely wasn’t working in the dark.

In addition to the information she gathered from the Zip founders, she did a great deal of research across multiple areas of interest.

“I usually focus my research in four places: competitors, like-minded brands and best practices, trends, and inspirational design and art pieces related to the project in some way.”

To explore various typefaces and fonts currently being used by other designers, Rong visited Behance and Dribble.

Then, to gain insights into brand identity, Rong went to WGSN, which identifies itself as “the global authority on consumer and design trends,” forecasting product design and consumer trends using in-depth analytics.

This type of research doesn’t lead to one-to-one copying of existing design templates or aesthetics; instead, it functions as a barometer of what’s currently happening in design.

For this rebrand project, this research allowed Rong to gain insights regarding what other companies in Zip’s general sector were currently doing, and how they were presenting themselves to their target audiences.

Not only does this help rebranding efforts keep pace with the competition, but it can also allow a designer to decide in which ways the current rebrand can distinguish itself from that competition.

Rebranding may be a challenge in itself, but Rong’s work for Zip/Evergreen also had to be completed very quickly, in only a month’s time.

Technically, it might have been better to give the designer more time to create and refine new branding materials, but Rong says that she actually enjoys working within short timelines, as they showcase her ability to deliver high-quality results, even when the clock is ticking.

“I don’t mind an intense timeframe. This is also why I like the agency environment more than in-house work: I get to experience much more variety and demand when working with an agency, and that helps keep me sharp.”

At the end of the day, a deadline is a deadline, and having that hard limit in mind when moving through the various stages of design can be an excellent motivator for some.

Actually being able to deliver a successful design that the client loves, meanwhile, is a special talent earned through years of intense professional design work.

If you’ve been wondering exactly what kind of work Zip does, you’re not alone.

Like many other B2B companies, the services offered by Zip are intangible and complex, relating to the operations of other businesses.

It follows, then, that only individuals with intimate knowledge of these businesses and how they’re run would be able to quickly identify and understand the service being offered.

Zip is a B2B SaaS product.

Zip specifically helps with B2B procurement, which is the process of sourcing the various goods, materials, or products that need to be procured from other vendors.

As you can see, may not be the easiest thing to understand, especially for people who don’t have experience with any of these tasks or processes.

Helping Zip’s target audience to better understand their product was a major goal for this rebranding.

As such, Rong had to find a way to communicate the basic concept via brand identity.

“The technology is not tangible, so I wanted to use a metaphor to represent the brand. Zip simplifies the procurement process in any stage or phase with different departments. Therefore, Zip is like a solution that seamlessly weaves into different stages or phases and departments.”

This metaphor, which was referred to internally as “weave-in,” helped guide the creation of a new brand identity.

On the surface, the branding is pleasing and attractive, but for anyone who has an idea of what Zip provides, various design elements take on new, heightened meaning.

Coming away with a lesson

The Zip rebrand wasn’t just another project for Rong, especially given the awards recognition that the work received.

But outside of the SFDWA win, Rong sees every single project as an opportunity to learn something new or find some kind of valuable takeaway.

“Every client teaches me something. All of them are doing different things, and as designers, we need to understand their product, mission, and story both inside and out and be able to visualize their imagery.”

The Zip work was definitely a reminder of how important it can be to craft a brand identity that satisfies stakeholders and communicates effectively and effortlessly with the target audience.

The next time you’re faced with a design challenge, try to ask yourself what works right now, what aligns with the current needs of the client.

Even the most difficult design jobs can be made a bit easier if handled just one step at a time.

In this article:featured, Yu Rong