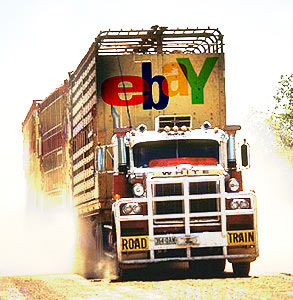 The world’s biggest and best known auction site, eBay, has had yet another high profile outage, taking its total number of downtime instances this year to 11. The website monitoring service downdetector.co.uk reports that floods of users started complaining about being unable to access eBay over Wednesday 3rd and Thursday 4th September, in an outage that has since been confirmed by the auction giant.

Both US and UK users were affected by recurring problems with the eBay site and the company have subsequently taken to Twitter to apologise for this latest incident but the frequency of its outages have left many users beginning to question whether the company knows what it’s doing. With 11 major operational flaws so far this year, eBay’s reputation is seriously flagging and this most recent setback has done nothing but agitate its millions of loyal users. Back in May of this year eBay was forced to email over 128 million users to inform them they’d need to update their passwords after a major security breach left account data compromised and the company are still dealing with the fallout from this, with both US and European authorities threatening to take action against them for their supposedly lax approach to security.

Ebay will be 20 years old next year and its frequently failing website has left many users to question whether it is still running on the same hardware as when it launched. Indeed there are frequent accusations leveled at the company that they’ve not invested enough in their infrastructure and equipment to be reliable enough for their millions of users and their IT support bill must be well into the hundreds of thousands this year!

Whilst any eBay downtime costs the company money, unlike most eCommerce retailers their downtime doesn’t only have a negative impact on their own earnings, and it is the livelihood of their millions of trade customers that is also put at risk. For this reason many of eBay’s users simply cannot afford for the site to be down as every minute it’s not working could be costing them potential trade.

Angry eBay traders took to Twitter to voice their frustration at the latest site failure and its impact on their own businesses, using the hashtag #ebaydown, and it’s not good reading for the $60 billion company. Some choice examples from disgruntled users include:

@jenelle: Total fail by @ebay. When your site is down, stop your promo auto tweets and say there are site issues. Hopeless.

@stay_resilient: @eBay can you fix bloody ebay for once? Ebay charges silly money for their services that don’t even work!

The monopoly eBay have had in the online auctions field has been absolute and it is one of the biggest, most recognisable and most profitable websites in the world. So is it resting on its laurels and abusing its position of power by failing to meet basic levels of service as should be expected by its huge userbase? If things don’t change, there will surely be more than a Twitter hashtag trend as backlash and users will start voting with their wallets (and PayPal accounts) by looking elsewhere.