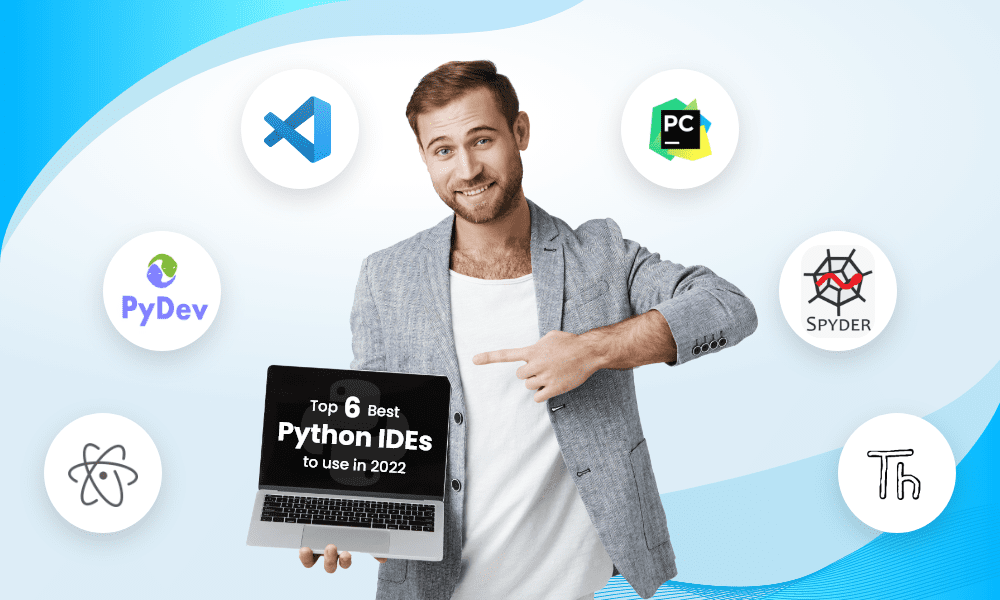 Python is a very famous programming language that is used to create software and applications across the world. As per the reports around 50% of developers prefer Python development over others. It’s the best choice for new developers because it’s very simple to learn. If something has advantages then it has certain disadvantages which have to be considered while choosing. In the same way, Python Integrated Development and Learning environment (IDLE) has limitations that beginners realize after a while. As a result, after gaining some expertise with IDLE, most programmers lookout for tools that can help them in writing codes more quickly and effectively.

Using a code editor like GNU/Emacs to enhance the basic shell while enhancing coding and debugging speed is the next logical step. Most developers, on the other hand, will wish to progress swiftly to full-featured integrated development environments (IDEs).

Code editing, interpreting, code profiling, debugging, and version management are just a few of the functions available in IDEs.

Most companies prefer Python Front End Web Development over other frameworks hence they look for developers who can provide them with web development services at the best. In this post, we will discuss some of the Python IDEs that can help you decide which one is best.

Here are some of the top Python IDEs available today, which can be used by even the most inexperienced developer to improve their programming experience. These IDEs allow developers to grow their skills as they gain experience.

It’s Microsoft’s open-source IDE which is available for Mac OS, Linux, and each Windows platform. VS Code is a highly customizable editor which is light in weight and allows you to modify source code and extend it with your libraries. Switching to VS Code is a two-minute process. This ease of use, combined with the user-friendly layout, makes VS Code one of the greatest and most user-friendly IDEs available today, and a favorite among many developers.

VS Code supports other languages as well. Since it was written with the electron, a C++ or Java program writing application, it only works with Python after adding to a Python extension. VS Code’s marketplace always has an excellent assortment of extensions in it, and this is a strong point for the tool. The best part is that the majority of these extensions were created by the community and are completely free to use.

The fact that many beginners who start on a Windows system initially find VS Code as the sole available IDE fosters this user-generated community even more. In other words, the VS Code community is huge and increasing all the time. A ‘zen’ mode is another noteworthy feature of this ostensibly lightweight program. It even hides your windows except for the file you work on. For many developers, a crowded desktop reduces productivity and makes manual debugging more difficult. Let’s discuss its limitations and advantages.

JetBrains’ PyCharm is a robust Python-specific cross-platform IDE. PyCharm is extensively used and has a strong community to assist new developers in getting their feet wet. It is available in two versions: a free basic version and a paid version. Among Python IDEs, PyCharm boasts some of the most advanced feature sets. The free (Community) edition includes beginner-friendly features like code completion, syntax highlighting, and code verification, which make it simple to discover potential coding errors. It also comes with tools for debugging and testing.

PyCharm also has various plugins and extensions which it offers to developers and other than this it also offers crucial security plugins to ensure security. These assist new developers to learn that it is not the fault of ransomware, it is the weakness of their codes that provides hackers the chance of attack. Django Pycharm experts are also well versed with a set of powerful scientific tools that data scientists found useful to a great extent. Have a look at a brief about PyCharm.

The following are some of PyCharm’s most significant features:

PyDev and Eclipse are two crucial IDEs of choice for developers who want to study multiple languages at the same time. The Eclipse IDE was designed to work with Java at first, but later development resulted in various plugins that allow Eclipse to function with other languages. Eclipse’s Python IDE includes the PyDev plugin.

It’s open-source, which makes it a cost-effective option for newcomers. PyDev, on the other hand, asks that users donate through PayPal or Patreon to help fund future development. As new developers learn Python syntax, PyDev’s code completion capabilities come in handy. Furthermore, code analysis and code coverage technologies assist developers in writing code faster and with fewer problems that need to be debugged. PyDev is also compatible with the Django Python framework, which makes development considerably easier. If you are well aware of PyDev and Eclipse, it will help you to switch between languages if you are not finding one suitable to work further. Those who have worked with PyDev should have no trouble transitioning to Eclipse and Java programming.

Generally, Eclipse takes more time and effort to learn because of its broad environment, multi-language support, and a large set of features. Let’s shortly understand this IDE.

The following are some of PyDev’s most prominent features:

Spyder is specifically used by data scientists and ML professionals due to its advanced features. It comes with the Anaconda distribution, which includes Scikit-learn, Mumpy, Matplotlib, Scipy, and many more. Some of its major features include auto-completion, a powerful debugger, data visualization tools, and much more. Spyder is designed exclusively for data science and hence works seamlessly with all of the industry’s leading tools.

Sypder has all the most demanded and helpful code editing features like syntax highlighting, auto-completion, and code analysis. However, it is distinguished by its more advanced features. It includes built-in integrations with a variety of scientific packages, including NumPy, SciPy, iPython, and matplotlib. Spyder is noted for its effectiveness in discovering and reducing bottlenecks due to its robust debugging capabilities.

The following are some of Spyder’s most significant features:

Thonny is a Python learning IDE that is ideally suited for novices. It is also best for people who teach Python. It explicitly encourages experimentation and is appropriate for folks who have never written Python before. The virtual environment is simple to use and resembles a traditional Microsoft interface. Thonny is a native program written in Python that does not use a lot of memory.

Thonny has a unique feature that allows you to monitor the compiler’s activity and see how different shell commands influence the variables. The debugger is one of the simplest we’ve seen, and it’s neatly and easily located on several function buttons for easy access.

Even before running the code, it automatically indicates frequent problems. Thonny IDE can recognize and format variables while also informing you of the changes it has done, allowing you to learn more about your code and receive real-time feedback on your projects. The source code supports javascript modification and interactivity, allowing you to construct your extensions and applications.

Atom is yet another highly customizable code text editor with a slew of capabilities. It is linked to GitHub, one of the largest online code communities, and includes several extensions that make it extremely adaptable, depending on your setup. Many developers use it because of its extremely minimalist UI.

It isn’t just for Python development; it can also manage other coding languages that many programmers use. To activate Python support in the IDE, you’ll need to add an extension. This also means that the app uses a javascript environment to run the code instead of running it natively. Some users may experience bloating and slower execution as a result of this.

But it isn’t all doom and gloom. Atom also has several other capabilities that help with efficiency and cross-application processing. Atom offers a clean, easy-to-use interface that makes managing many projects a breeze. This can also help you be more productive.

The following are some of Atom’s most prominent features:

These are some of the top Python IDEs that one can choose to gain expertise on. The accompanying list provides a thorough examination of the various capabilities available in the plethora of IDEs now on the market. Every developer has distinct talents, tastes, and needs, hence there’s no such thing as the “finest IDE”. Various other Python IDEs are also there but these are some of the major ones. Lets us know if you have any query related to this.

Mahipalsinh Rana is a CTO of Inexture, a leading python development company. He has more than 15 years of experience in software development with a strong focus on mobile app development for all kinds of platforms including iOS and Android. He loves to write and share about technology, startups, entrepreneurship, and business.