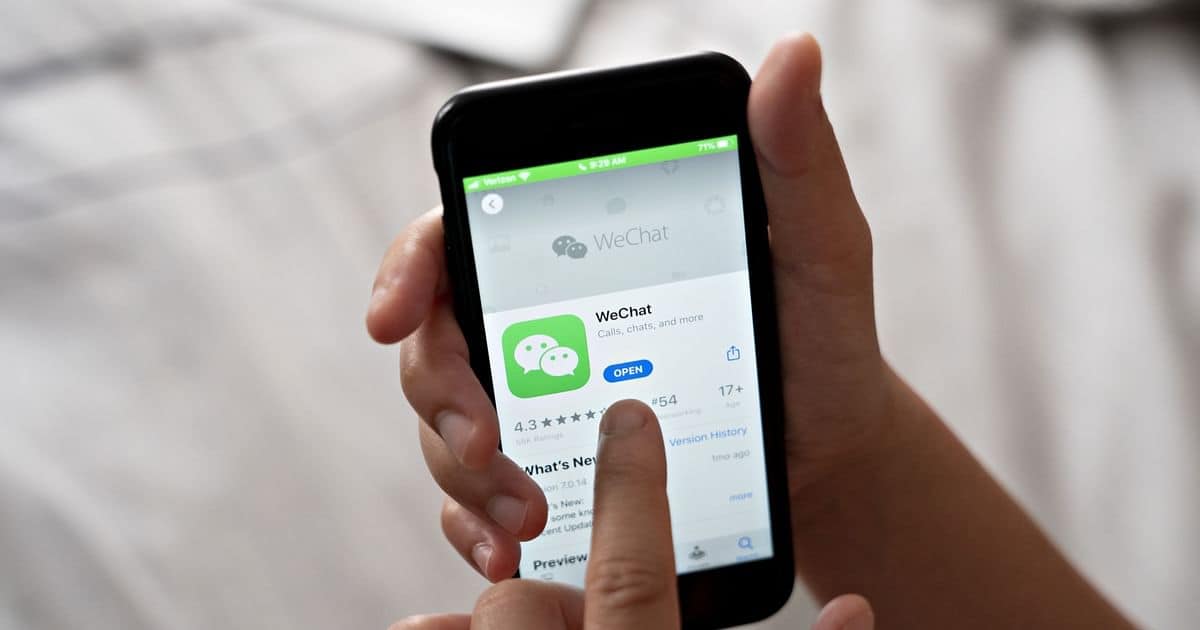 A few years ago, QR codes (two-dimensional “quick response” barcodes) were supposed to be the “next big trend”. They can be used to scan the URL of a magazine or poster page and thus get more information about a particular product. However, QR codes never became popular. Now everyone has safely forgotten about them. If you ask a bystander to scan a QR code, most likely they will not know how to do it. 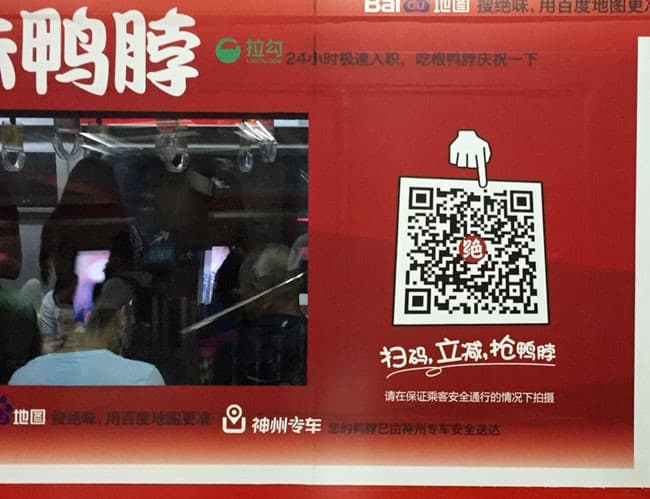 The QR code of the Chinese company Juewei advertises food products on a subway car. The QR code redirects users to the WeChat page where they can buy something.

They did not take root in the United States and European countries. In China, they are ubiquitous, largely due to the popularity of WeChat (as of April 2016, the service had 700 million users).

How do you get a large number of people to learn a new way of interacting? Three conditions are needed:

First of all, interaction must have a definite advantage. No one wants useless innovation.

People need to be introduced to the new development in a timely manner. There are many useful inventions that everyone forgot about only because information about them did not spread quickly enough.

QR codes and the shake gesture meet all of these criteria in China, but not in the US. In the US, to scan a QR code on the street, in a store, or from a magazine cover, you need a scanner – a special application. The phone camera alone will not be enough. In other words, QR code scanners have not passed the usability test. To scan the code, you must first find and install the application. The Chinese WeChat app has been shipping since 2012 with a built-in scanner – and millions of users don’t need any additional android app development company.

Residents of the Celestial Empire quickly mastered QR codes also because with their help new people were added to the contact list. There was no need to know the name of a new acquaintance or his phone number – it was enough to scan the code. Group chats were also created using QR codes. 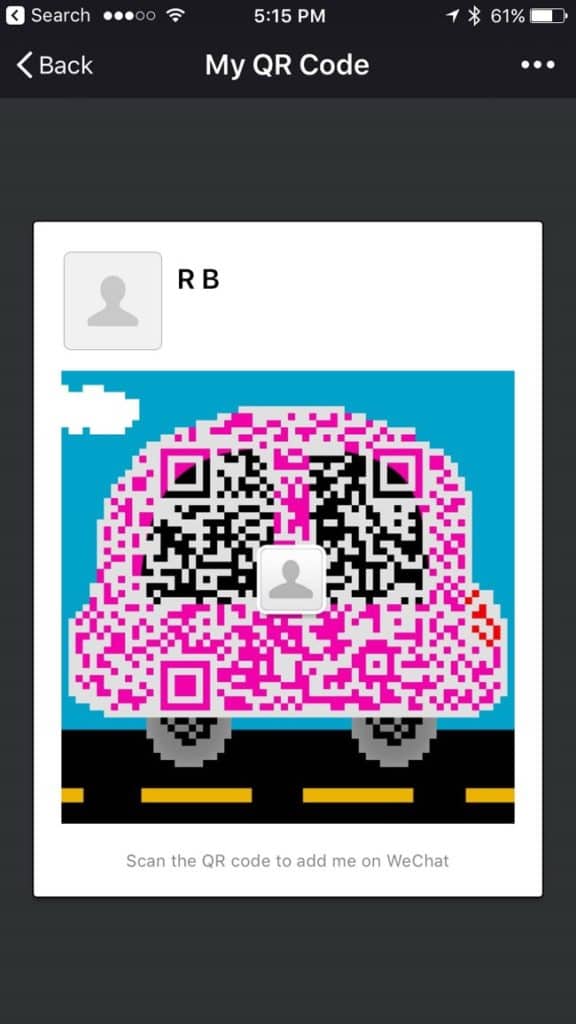 The user can scan the QR code on another person’s smartphone and add it to the contact list.

The Chinese audience mastered this gesture a little differently. If you shake the phone, the user will connect to another person who shook the phone at the same moment. But the main thing that made this gesture popular was financial motivation. People shook their phones during a popular TV show (usually shown at the end of the year) and received red envelopes. By tradition, money is given in such envelopes.

And almost every Chinese person, if he did not shake his phone with his own hand, at least heard about this gesture.

In the US, none of the major players in the mobile market has functionality that depends on QR codes. Standard iOS or Android apps such as a camera do not scan QR codes.

The “shake” gesture is present in the Mail app in iOS as an undo function, in Google Maps for feedback. But all this is not the main functionality, and many users do not know about it.

The way to motivate users with a reward, something like red envelopes, is less realistic for a Western audience.

QR code – an intermediary between online and offline

People in China often deal with QR codes in their daily life. But the main point of all these interactions is to link online and offline. (The industry press in China often uses the abbreviation “O2O” – “online to offline”).

QR codes as a pointer to the ability to go online:
the user takes a snapshot of the code and so goes to the desired web page, subscribes to a company’s newsletter or visits its WeChat page – no need to enter anything in the address bar. As one user said:

“I didn’t want to memorize the name of the company’s official page, nor to search for it – after all, fakes often come across. So I just took a screenshot of their QR code and scanned it on WeChat. ”

A QR code is not only quick access to a website without having to enter the address in a browser but also an opportunity to find out information about physical objects. According to another user, he received a gift from a friend and did not know how to use it. The QR code provided instructions (and just as accidentally managed to find out the value of the gift).

In China, QR codes are placed on almost any physical object – be it eggs in a refrigerator, a message board with hidden advertisements, or a paper card with a sound extension. 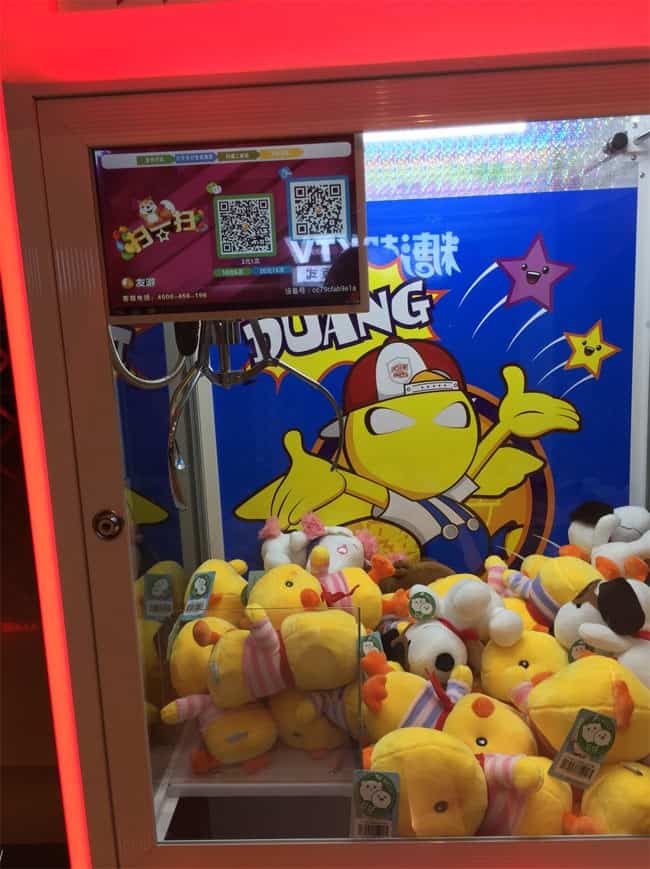 People use a QR code to buy tokens for a toy slot machine. 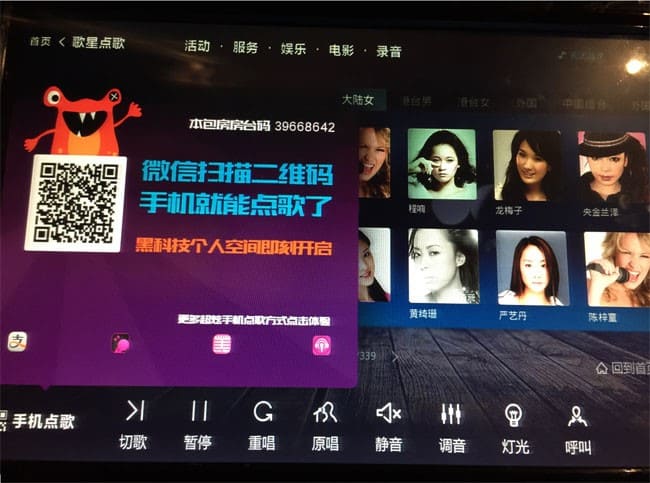 Karaoke: Visitors can use a QR code to select the next song. 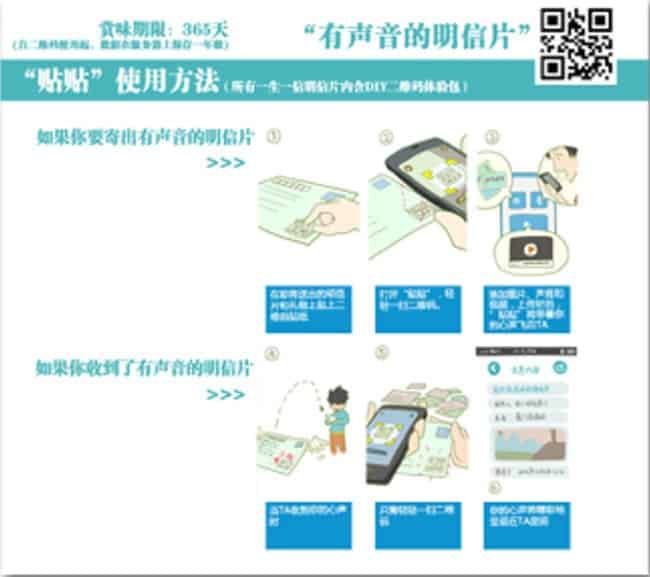 Instructions on how to add a video or image to a QR code on a paper card.

QR codes also confirm certain online processes. For example, in a situation where a passenger bought a ticket on the website but did not print it. (In Western countries, passwords are used for this: electronic barcodes make it possible to board an aircraft, go to a cinema or a museum).

The shake gesture also allows you to go from offline to online. But depending on the time and place, WeChat recognizes this gesture differently. If a person shakes his phone next to a store, WeChat will provide discount coupons or provide useful information for customers (parking, sales, etc.). Participants of an event or viewers of a TV program can use this gesture to vote, express an opinion or ask a question. When listening to music on a smartphone, you can find out the name of the song. Those who shake their smartphones at the same time exchange contacts in this way – a way to meet new people.

WeChat Pay and AliPay are the two largest payment systems in China. Both of them have a function that generates QR codes for payment. So, in the store, the customer scans the code and pays directly in WeChat. The seller, in turn, can also scan the client code and thus receive payment. Small companies that do not have a POS system can offer the possibility of cashless payments via a QR code.

A third of the total activity on WeChat is payments. Most of them are translations for offline companies. Here’s another user comment:

“I was in the market and just wanted to buy some vegetables for dinner. It was not very convenient to get the wallet out of the backpack, and the phone was at hand. It’s good that they accepted payment via WeChat. I only had to scan the code – no change and extra coins in my pocket. Purchases are recorded in real-time, so it’s easier to track expenses. ” 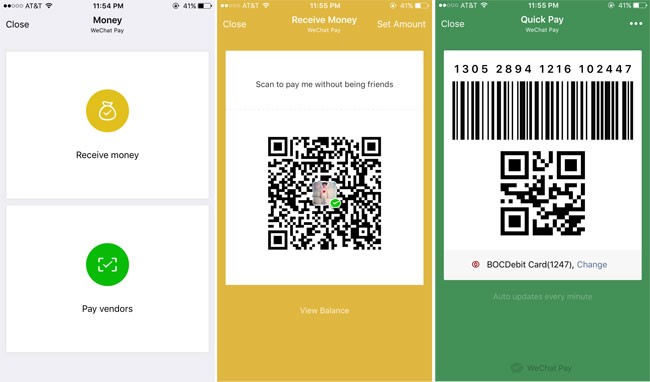 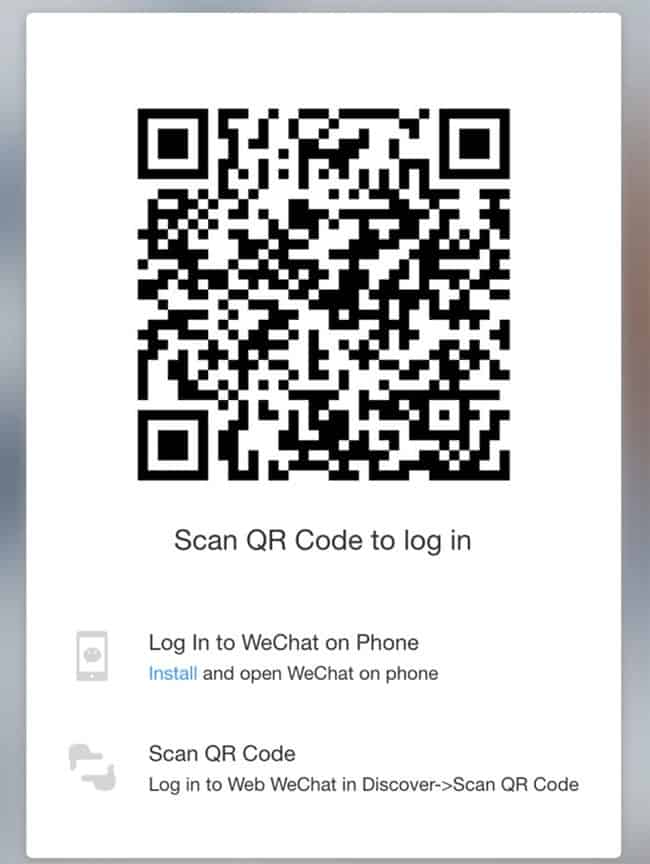 QR codes are also used for authentication on new devices.

Instead of entering data into WeChat on a new device, it is enough to scan the code with a smartphone on another tablet or laptop. 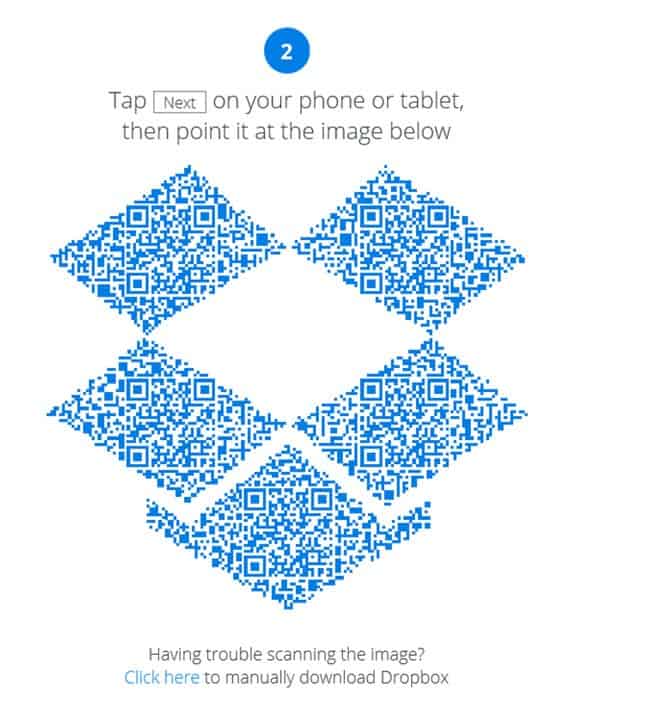 The disadvantage of QR codes is that they do not contain some kind of graphic hint or verbal hint that would explain what the code is actually for. But the appearance of the code can be changed – and made it look like an icon. So the seemingly meaningless matrix code will take on some meaning.

A QR code takes up more screen space than a regular link or button. Especially on a smartphone screen, a large number of QR codes are detrimental to the user experience.

In China, many mobile app and service developers use QR codes. In 2013, Alibaba ran an ad campaign that was timed to coincide with the 11.11 Shopping Festival (analogous to Black Friday and Cyber ​​Monday in the US). Thanks to QR codes, customers of a Chinese retailer added items in stores to a virtual cart.

The shake gesture is present in many applications. For such functions:

Both of these ways of interaction speed up data entry and thus facilitate the digital transition. And this, in turn, contributes to the expansion of omnichannel UX. The shaking gesture requires certain identification marks because people can only find out about its presence from advertisements or special instructions. As you become familiar with the functionality, it will be used more often, and even without additional prompts. This is another way to improve UX: the developer delegates a certain function to an invisible but familiar gesture, thus freeing up such valuable space on the device screen.

In the US, this gesture is implemented in many applications, but few people know about it. And then the developers have to either additionally visually report the gesture in the interface or use the gesture for secondary functionality.

But the situation could change. Western companies are trying to replicate the success of WeChat. Facebook Messenger already has features like WeChat (personal codes, the ability to contact sellers). Maybe in the future, users will be able to scan the Facebook code and thus pay the seller. Or shake your phone to chat with a consultant in an offline store. This is a difficult task as there are many alternative ways of interaction. (People pay for a purchase with a regular credit card, Apple Pay, or PayPal.) But if shaking and QR codes do take root, the experience will only benefit from it. 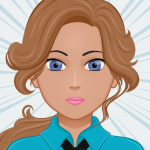 Bella has over 5+ years of experience leading strategic digital marketing, social media, influencer engagement and analytics initiatives. In addition to acting as the Director of Marketing and Customer Experience at BCBS, she is also an author on the topic of transforming teams and partners to beat your competition. 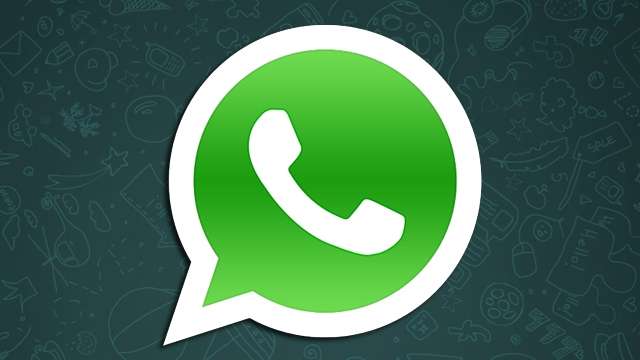 Every other person round the globe is using WhatsApp Messenger, an all rounder in the field of chatting applications. It instantly became the most...

The Top 10 Mobile Applications Used In The World Today

As you have seen in the current world, with the advents of Smartphone, the use of smart applications has been increased.  The reasons are...