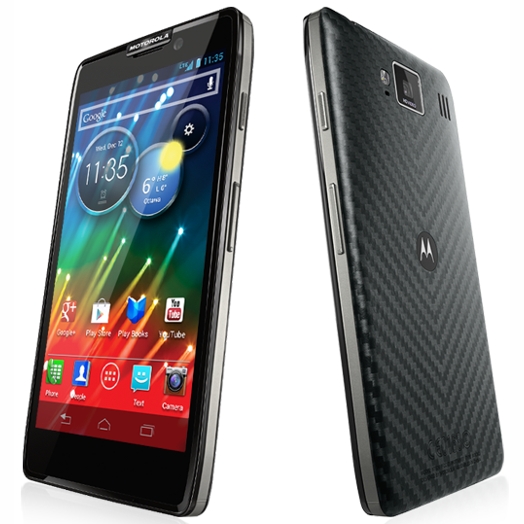 The Motorola RAZR HD Android smartphone launched in the US in 2012 and is just now launching in the UK. But can old tech cut it in today’s ruthlessly competitive smartphone market?

The RAZR HD continues Motorola’s strong and distinctive design pedigree. The RAZR HD is the largest in the Droid RAZR series, with a huge 4.7 inch screen at its heart. This is a high definition screen with a 1280 x 720 pixel resolution. That marks it out as a 2012 phone, as the latest generation phones such as the Sony Xperia Z and HTC One have 1920 x 1280 pixel screens. Still, it’s an impressively detailed display and thanks to its Super AMOLED technology, it’s also bright with vivid saturated colours.

The phone chassis is constructed from metal, with shatterproof Gorilla Glass on the front and Kevlar fibre on the rear. Kevlar fibre is a synthetic material used to make body armour. It’s reported to be five times stronger than steel. Both the outer surface and the interior electronics are protected with a splash-guard coating.

The result: a large and heavy phone, but almost indestructible and with a very large high-definition screen.

The RAZR HD has a fast 1.5GHz dual-core processor and 1GB of RAM, making it fast but not quite as fast as high-end rivals. The 12GB of built-in user memory can be increased by adding a memory card, giving a maximum storage capacity of 44GB, which will be plenty for most users.

The phone is an Android smartphone and it runs Android Jelly Bean 4.1. An update to version 4.2 may be released later.

As with the screen and processor, the camera isn’t good enough to rival the flagship devices of 2013, but it’s on a par with camera phones from last year. With an 8 megapixel sensor, auto focus and an LED flash, it’s good enough to replace a compact digital camera for most uses, but underperforms in low lighting conditions.

The RAZR HD is 4G/LTE compatible as well as supporting Wi-Fi data connectivity. This makes it an ideal phone for high data users.

It also supports NFC and Bluetooth wireless connectivity in addition to a micro-USB port and a 3.5mm headphone jack.

The battery life of all the DROID RAZR phones is outstanding, and the same is true of the RAZR HD. Despite the large display and the dual-core processor, the phone can deliver up to 16 hours of talk time or 20 hours of music playback. The AMOLED technology used in the display is ultra-low power and the phone comes with a very high capacity 2530mAh battery.

Another weapon in the phone’s battle against power consumption is the SmartActions app, which can help to manage the phone and reduce power requirements.

Conclusion – still excellent for the price

The design and construction of the RAZR HD is distinctive and first rate. It feels bulletproof and unbreakable, and its slim design has lots of appeal. At the same time, it’s not a small phone and won’t suit everyone’s taste for that reason.

The display is large, bright and finely detailed and the phone runs smoothly, thanks to the dual-core processor. There’s plenty of memory available, the camera is better than average and the connectivity and battery life are outstanding.

The phone can’t compete against the latest flagship models from Samsung, Sony and HTC, but the price reflects that. If you’re looking for a stylish and capable Android phone, and don’t want to pay a premium price, the RAZR HD still has a lot to offer, even in 2013.