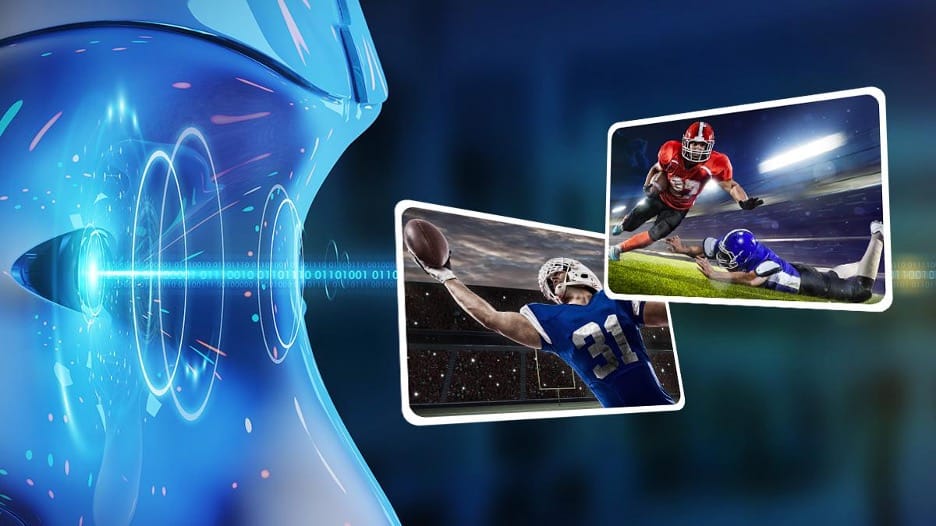 Alt-Text: Technology in football became a somewhat behind-the-scenes evolution in the NFL. That’s how it all started back in 1956.

Paul Brown, co-founder and the first head coach of the Cleveland Browns, secretly placed a radio receiver in his quarterback’s helmet. It was the first experiment with coach-to-player electronics.

Radio helmet technology soon became banned in the NFL. In 1994, the technology returned after a five-second reduction in the play clock.

Since then, the NFL’s new technology has brought league-wide improvements to help players, coaches, broadcasters, and fans.

The technology used in football has revolutionized the sport unlike any other around the world.

How’s Technology Used in the NFL?

In today’s world, data collection has changed how we interact with each other daily. That’s no different in the NFL.

Coach-to-player communications for a single defensive player helped to improve play calling in 2008. In 2012, on-field transmitters went from analog to digital. Two years later, NFL referees became equipped with headsets to communicate with each other.

Back in 1978, the NFL first tested instant replay. The league waited until 1986 to use the technology. It only lasted until 1992 due to inefficiencies.

It returned to the league as a better technology in 1999. In 2007, instant replay capabilities included high-definition (HD) cameras, freeze frames, and multiple angles.

Each of these evolutions benefited the game by increasing fairness to protect the integrity of the sport.

Further advancements of technology in the NFL include:

Fans also enjoy this new technology via an NFL OnePass App. The app acts as a subscription service with updated stats and mobile video capabilities.

All this technology provides live game trackers to fans around the world.

Real-time NFL stats also revolutionized the sports betting industry. (Check out Safest Betting Sites to learn all about betting on the NFL.)

The technology used in American football remains at the forefront of making the game one of the most popular in the country.

What Type of Technology Is Used in Football?

Most Americans may wonder: Where is this technology used in football? They might have gotten so used to having the best technology in the world that it’s almost commonplace.

But the way the NFL applies technology to make the game better is truly incredible.

The RFID transmitters used in NFL games (Zebra Technologies) first began in players’ shoulder pads. Transmitters around the stadium collected data from every player on the field for distance, speed, and location.

That’s where the updated stats come from. But this type of information also gets used by coaches to keep track of player performance and durability.

Even game balls have RFID transmitters installed inside of them. Broadcasters translate that data into visual effects on instant replay. Configured with precise measurements of how far the ball went and its speed, this evolution brings the game to life for fans watching on TV at home.

This technology also comes in handy in the offseason for scouting purposes.

Virtual and augmented reality began with the first-down marker as a yellow line on the screen at home. Now, the NFL is experimenting with Samsung devices that fans can wear live at the stadium to see 36-foot holograms of players in real-time.

Coaches and players also use technology on the sidelines via tablets to observe offensive and defensive play formations. This brings a new competitive edge to every game.

Fans at home can track stats for their fantasy leagues through Xbox One while simultaneously never missing a play in a live NFL broadcast.

The league ensures careful use of new technologies to keep the NFL tradition alive as it quickly evolves with the times.

As far as trends go for the NFL in 2022, the league tests technology reasonably before it gets implemented. To reduce controversial calls at the goal-line, some call for laser technology.

The theory behind that technology comes from tennis as a form of spotting the ball. So, tracking the ball for first downs and in the end-zone certainly might be a tech trend next year.

Some of these innovations include:

Going forward, other tech trends for the NFL might also include better video streaming services and the formal adoption of cryptocurrencies. For example, a few players started converting their paychecks into bitcoin.

The most recent example comes from Green Bay Packers quarterback Aaron Rodgers, who partnered with Cash App to receive part of his salary in BTC. Rodgers announced that as a giveaway via his Twitter profile.

The NFL announced a partnership with Dapper Laps Inc. to create digital video highlights in the form of NFTs for fans to collect and own.

In many aspects, the future of technology in the NFL looks very bright.

From state-of-the-art helmet technology to RFID transmitters in players’ uniforms, the NFL’s use of technology grows at an exponential rate. As sports betting becomes mainstream, so does crypto and blockchain technology.

The NFL remains at the forefront of most professional sports leagues when it comes to using technology to improve the game for everybody involved. A majority of players, coaches, franchises, and fans all seem to welcome these changes.

Big data and the use of technology in the NFL combine to form one of the biggest changes in modern society.

Bryan Myers is a freelance writer from the U.S. In 2019, he traveled to 12 countries around the world. Currently, he’s in Puerto Rico after being away from the U.S. for three years. He’s been writing for Safest Betting Sites since August 2019, covering the 2020 U.S. Election, entertainment, crypto, online casinos, and sports betting.