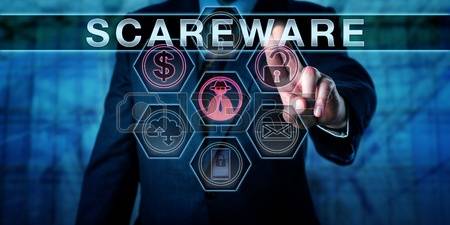 The Microsoft security intelligence report released recently shows a significant increase in scareware attacks. Scareware refers to a group of software programs that are marketed to computer users by sales tactics designed to scare people into thinking their computer has been infected by viruses or critical errors that require urgent attention. The aim of this scam is to coerce you into paying for downloadable bogus programs that would either do nothing or steal personal information from your computer. Scareware usually come in the form of pop-up messages that resemble original Windows dialog boxes to catch unsuspecting users. Examples include  “SpyProtector”, “WinDefender 2009”, “XP Antispyware 2009″,” AntiVirus 2008 – 2010″ and “WinFixer”.

It is not difficult to know if you are a victim of scareware as your computer would be suddenly bombarded by multiple windows and pop-ups appearing with various error messages. These warnings usually cite system errors and suggest your computer has been compromised and infected with viruses or malware which can be fixed instantly when you purchase their bogus software. Unfortunately, not all of these malicious programs come from sham websites as they are also advertised on legitimate websites including Google ads.

However, if your computer has been affected already, you do not have to rush into reformatting the hard drive. Scan your computer with an updated anti-virus program and run a quality anti-spyware/adware to fix the root problem. Alternatively, use the system restore option; boot in safe mode and restore to a previous working configuration.

Image via Wikipedia Recently, there campaign group, Get Safe Online, issued a warning to Internet users about the rise of Internet cold-callers who offer...