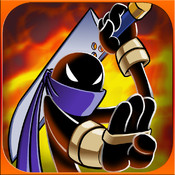 Once there was a small city… one day, evil came to the city, he has taken over the city with his evil force. You, as a hero, must rescue the city.

Ultimate Stick Fight is a smartphone game app described by its creator, Dragon Nest Studio, as “a beat-em-up game with smooth animation and real martial art moves”. The game is based on the premise that a notorious Dragon crime family has taken over a small city with its evil power. Thus, the game player has to master a range of combo moves in order to defeat several enemies along the way, until the boss is found, eliminated and the city is saved.

You can choose to play as Ryan (who fights with bare hands) or Slash (who fights with a sword). Each player must master up to 20 moves and styles, learn the punch, kick, juggle, slide, and spin combo and throw objects such as boxes, dumpsters and phone booths. In addition, the game comes in 40 stages, 8 unique environments and 3 levels of difficulty from which you can earn coins and stars as you defeat your enemies. With your earned coins, you can buy new combos or simply upgrade existing skills for new moves and animations. The game app is available to purchase and play on both Android and Apple devices.

A carefully designed side-scrolling beat-em up game, Ultimate Stick Fight mixes an old-school look with a modern feel. The gameplay is remarkably simple, easy to use and can be addictive. With so many levels and environments, there is never a dull moment for those who love beat-em up games or just want to relax after a hectic schedule. So then, if you want the action, enjoy the thrill and adventure of modern app games, you will certainly enjoy the excitement that Ultimate Stick Fight brings along.