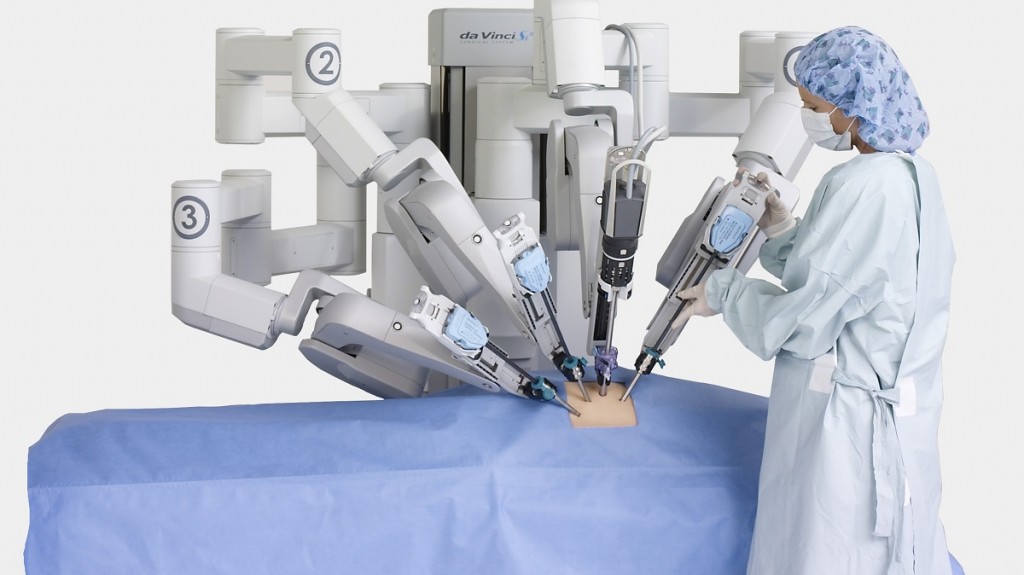 It may sound like the stuff of Sci-Fi, but robotics is already a big part of surgery. You may know someone who has had robotic surgery, or you may have even had it yourself. If you haven’t, there is a large chance that you will someday.

At the moment, robotic surgery mostly refers to human-led operations that draw on robotic technology for assistance. The da Vinci surgical system is a prominent example. Used since 2004 in Guy’s and St Thomas’ Hospital in London, the machine has four arms, which are freely moving and steadier than a human’s, and a high definition display for showing surgeons X-Ray or MRI images during procedures. The da Vinci robot is a favourite of the ear, nose, and throat, maxillofacial, and gynaecology departments.

But with the fast development of artificial intelligence (AI), there is a chance humans will take a step back, and we will have to decide if we are okay with putting our lives in robots’ shiny metal hands.

It may seem like a strange prospect, tapping into our science-fiction reared fears of intelligent robots, but there is, in fact, an argument that this is just a part of an ongoing process whereby surgeons use technological innovations to assist them in their ever-complicated field.

Surgeons and technology: a history

We don’t know for sure when the first surgical procedure was performed, but the earliest evidence of surgical techniques comes from around 2000 BC in the Turkish village of Ikiztepe. Even at this early date, surgeons were using obsidian blades not dissimilar to the scalpels they still use today. Archaeologists have found 14 skulls with incisions made by these blades, which indicate some kind of neural operation. The skulls are partially re-healed which tells us these patients survived for up to two years after the surgery.

There have been several surgery-changing inventions since the birth of the scalpel, each one making surgical operations safer and more effective. The invention of the Morton Ether Inhaler in 19th Century Boston ushered in the age of anaesthesia. In her powerhouse TED Talk on the subject, Catherine Mohr called this “truly a revolution in surgery.”

With anaesthesia, surgeons were free to open up and operate on parts of the body that had never been reachable before. But it wasn’t until camera technologies developed in the 1980s that these operations could take place through smaller incisions, with longer instruments and more precision with laparoscopy, better known as keyhole surgery.

Other surgical inventions are more specific to certain procedures: Ultrasonic handpieces are used to break apart cataracts from the inside of the cornea in phacoemulsification surgery; mechanical implements such as external braces and elongation nails can be affixed to a patient or transplanted into their bones during limb lengthening surgery.

During the process of limb lengthening, external braces are attached to the outside of limbs like small cages, are left for the patient themselves to ratchet via moving their limb back and forth. This means after the initial operation, limb lengthening surgery is semi-autonomous.

There are also life-saving as well as life-changing mechanical implants available, such as pacemakers, which are tiny computer chips that regulate the heartbeat using electronic pulses; and stents, which are inserted into arteries to strengthen them in some of the most delicate operations in the world.

Technology is constantly being developed to catch up with the complexities of diagnostics and to help cure patients in safer and more effective ways. In this context, robotic surgery starts to look a little more natural — perhaps the inevitable evolution of the surgical field.

The realities of robotic surgery

To determine if robotics is taking surgery into a grey area, we have to discern whether there is a tangible difference between robotics and the technological innovations that have changed surgery before it. Is the robot any different from the scalpel or the Morton Inhaler?

For the most part, it seems the android-like imagery conjured up by the term “robotic” is misplaced. As is the case with the da Vinci machine, robotic surgery mostly refers to operations carried out by humans who are utilising complex mechanical devices, allowing them to achieve feats they couldn’t with their bare (or, more likely, gloved) hands.

The Axsis robot surgeon, for example, can perform fine movements so accurately that it is capable of conducting cataract surgery. The two-armed robot does not work by itself, though; it is controlled by a human surgeon in the next room via two joysticks. This allows patients to benefit from the knowledge and technique of an experienced surgeon, and the assured mechanical accuracy of a robot.

This is similar to the way the da Vinci robot works, with the human surgeon controlling the operation at a console in an adjacent room. Some have speculated that this could lead to “long-distance surgery”, with doctors operating on patients on the other side of the world over the internet.

As long as connection speeds are impeccable, this shouldn’t be problematic, and it could prove particularly useful in areas of the world with outbreaks of contagious illnesses. But another likely future development in robotic surgery is more worrying.

Will robot surgeons ever work alone?

Artificial intelligence (AI) has made leaps and bounds in recent years, as best displayed by IBM’s Jeopardy-winning Watson. We can trust these AI robots to answer trivia questions, but would we trust them with our lives?

Singularity Hub reports that we soon might have to. Watson can store more medical information than any human could, and can respond to any questions a human surgeon may have or potentially use that knowledge for itself. AI machine learning could also pave the way for robot-only operations. As programs get better and better at recognising and building on patterns, it is possible that they could be trusted to learn surgical operations.

At the moment, AI is simply used to assist surgeons. If AI robotic surgeons start performing surgery on their own, we may have to reconsider our priorities. But for now, robotic surgery is just another development in the long, storied history of surgery and technology.