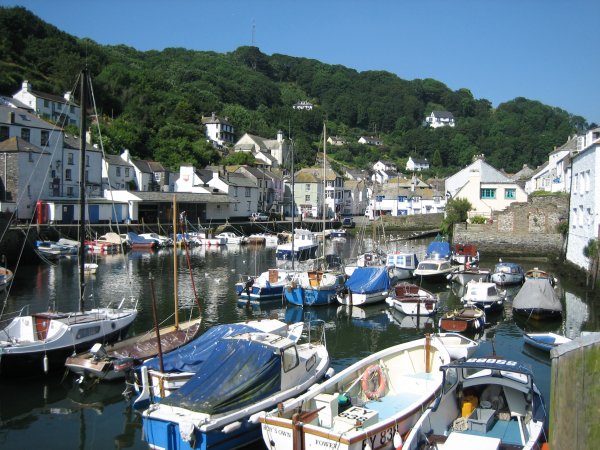 Polperro is a small picturesque coastal fishing village on the south-east coast of Cornwall, and outside the tourist season it is a quiet and peaceful place, with tightly packed fisherman’s cottages, an attractive harbour, and seven old public houses. The village’s atmosphere changes considerably in the warmer months when the tourists arrive, even though tourists may no longer drive their cars into the village, though anyone who doesn’t want to take the half mile walk from the car park to the village centre can always catch a horse and cart. Although the official economy from the 12th century onwards has been fishing, smuggling has also been a Polperro tradition. Local fishermen prospered from importing contraband tobacco, spirits and other goods, though in the 19th century the newly formed Coast Guard service made life a little more difficult for them. Although, as far as is known, smuggling no longer contributes significantly to the village’s fortunes, fishing certainly does, and there is still a twelve boat fishing fleet that returns with catches of ray, monkfish, pollock, scallops, bass and cod.

So who would have imagined that, in 2012/13, Polperro would become one of the best internet connected locations in the country, though it wouldn’t have happened at all without the assistance of the local church.

Superfast Cornwall is a multi-million pound project part funded by the European Union that aims to bring super-fast broadband to the county and the Isles of Scilly. The technology used is fibre to cabinet, and so in order to service Polperro it was necessary to find a suitable location for one.

The problem was that nobody could find anywhere to put it. The few streets that there are in Polperro are very narrow, even by Cornish village standards, and there are virtually no pavements at all. Teams of engineers scratched their heads over the problem, but there was no solution to be found. It was looking increasingly as if the super-fast broadband highway would have to bypass this rural idyll; without the green cabinet there could be no cable.

Then somebody had the bright idea of installing it in the churchyard of Polperro Methodist Church, and broached the idea with Reverend Ruth Goodland, the local church minister. In fact the church was more than delighted to be of assistance and was happy to give Superfast Cornwall the go ahead.

So far around twenty Polperro internet users have signed up for high speed broadband packages and the services are being used for both home broadband and business; they are even helping the local fishing fleet with real time weather forecasts and up to date prices for their catch.

In this article:Broadband, Cornwall, Isles of Scilly, Perranporth, Polperro