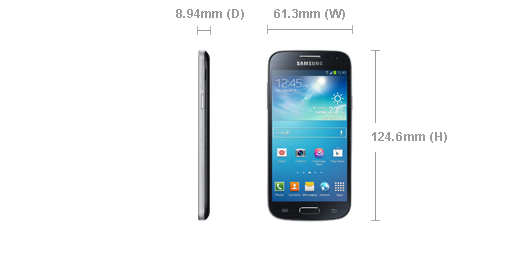 Samsung’s latest flagship phone – the Galaxy S4 has received a tremendous response from smartphone users around the world. However, the phone is quite expensive and targeted towards the high-end segment which means not everyone can buy one. Hence, the Korean company has come up with a Mini version of the flagship, a more compact and more importantly a cheaper alternative. In this article, we’ll go through the key specs of the Samsung Galaxy S4 Mini.

The phone comes with a polycarbonate body which measures 124.6 x 61.3 x 8.9 mm and weighs in at 107 grams. It is quite identical to the flagship S4 in terms of looks and styling, but it is considerably lighter and smaller in size. The design is extremely compact which allows you to handle and operate the phone. On the downside, the glossy finish on the back panel is prone to fingerprint stains.

Samsung Galaxy S4 Mini sports a 4.3-inch Super AMOLED capacitive display which supports a resolution of 540 x 960 pixels i.e. a pixel density of 256 ppi and aspect ratio of 16:9. It is equipped with Samsung’s Adapt Display technology which automatically changes various parameters like brightness, contrast, etc. to provide the optimum viewing experience according to the surroundings.

The device ships with an 8 megapixel primary autofocus camera along with an LED flash at the back and a 1.9 megapixel camera at the front. The rear-facing camera is capable of high-definition video recording of 1080 pixels at the rate of 30 frames per second and shooting still images of up to a maximum resolution of 3264 X 2448 pixels. Samsung has also added a lot of S4’s camera features like Sound & Shot, Night Shot, Best Photo, Beauty Face, HDR mode, Sports Mode, Continuous Shot, Best Face, etc. which offer users a lot of flexibility in terms of options.

The Samsung Galaxy S4 Mini has a dual-core Snapdragon 400 which runs at a clock speed of 1.7 GHz. The main processor is paired with an Adreno 305 GPU and 1.5 GB of RAM to deliver a powerful performance. For file storage, there is an internal memory of 8 GB, but only 5 GB is available for users. The phone’s storage capacity can be increased by using an external microSD card of up to 64 GB. Other hardware includes sensors like Accelerometer, Proximity, Gyro, Magnetic and Light.

The handset is loaded with Google’s Android 4.2.2 Jelly Bean operating system which has been topped with Samsung’s TouchWiz user interface. It has a wide range of inbuilt features and apps to provide you with an excellent software experience. Some of the pre-installed apps and features include S Travel, S Voice, S Health, Story Album, Group Play, Safety Assistance, Screen Mirroring, S Translator, Smart Switch and much more.

Samsung Galaxy S4 Mini has a standard removable Li-Ion battery with a capacity of 1900 mAh. Unfortunately, there is no official data available regarding the battery performance, but it is expected to power the phone for a full day on a single charge.

The phone is expected to reach markets around the world starting from August onwards. In the UK, the SIM-Free version is available for £380. 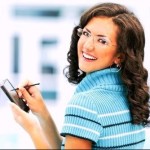 I'm a Content Writer for a leading price comparison portal based in the UK.