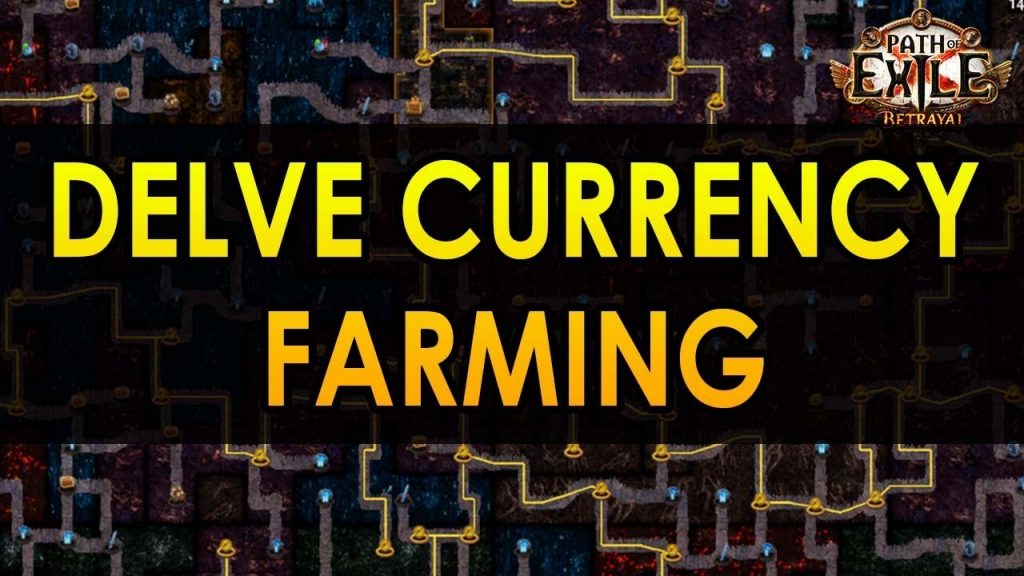 Ever since Synthesis, Delve has become a part of the regular content in Path of Exile. Now, you can go to the Azurite Mines anytime and farm for resonators, fossils, and POE currency. But there’s a distinction between simply farming for those things and effectively farming them.

In case this is your first time encountering Delve as content, here are a few things you should know. First off, Delve is chiefly set in the Azurite Mine, a mine that has been swallowed by a living and evil kind of darkness for the past 250 years.  Anyone who tried exploring it since then has been subsequently killed by the malevolent force residing in the mines. However, the inventor Niko created a machine called the Crawler. This contraption lights up the mines, allowing a safe exploration, but uses Voltaxic Sulphate, which can be found throughout Wraeclast, as fuel.

The Crawler is a self-navigating automaton. This means unlike other dungeons and former challenge leagues where you chart your own path, you’ll mostly be following Niko’s creation. You can do a bit of straying, but going too far without the Crawler’s light would almost certainly mean death.

As a reward for exploring these depths, you’ll have the chance to collect resonators and fossils, forms of POE currency exclusive to the Azurite Mine. Resonators, like POE orbs, change the rarity or the modifiers of an item, while fossils, which cause an item to have a specific modifier, are slotted into a resonator. This way, you can have a much more definite end result.

To get these special POE currencies, you’ll have to go to the side areas, as these are where resonators and fossils are usually found. These areas are often located in the deeper regions of the Azurite Mine, so if you want to farm lots and lots of them, you’ll have to go lower and lower. If you don’t have the luxury of time or the virtue of patience, you can also check out the areas in the upper levels, but just don’t expect there to be a lot of them!

Do note, however, that even in the deeper side areas, fossils and resonators aren’t exactly common. In fact, you’ll find more simple armaments or POE orbs than those two. They’re not what you came for, but they’re still worth quite a lot, so you might as well grab them if you have ample space but not much luck.

Second Run: All by Yourself

The previously mentioned method, while safe and effective, is also rather slow. Thankfully, there is a second method, which is a much speedier, but more dangerous way of farming. This is because instead of waiting for the Crawler to finally light up the areas, you’ll be running straight into the darkness itself. So that you won’t succumb to the darkness damage over time, you’ll need to have gear that will boost your Darkness Resistance up to around its cap. It’s also advisable to have high movement speed so that you’ll be less exposed to the darkness.

Aside from what’s already been mentioned, you also need to stock up on flares and dynamite. The latter is for you to have lighted areas and therefore a bit of a respite from the darkness, while the dynamite is so that you can destroy the breakable walls and get the loot from beyond.

At the end of the day, it’s up to you which method you’re going to choose. What matters is that you get want and need from Delve, and that you have fun doing it. Just be careful to not get killed by the darkness!

Path of Exile Delve: How to Farm the Darkness for Resonators, Fossils, Currency
https://www.techsling.com/2019/05/path-of-exile-delve-how-to-farm-the-darkness-for-resonators-fossils-currency/??utm_source=social_shares%26utm_medium=own_media%26utm_campaign=SESSBW
Be the FIRST to Know - Join Our Mailing List!

Angela Reese
A simple gal who has been playing video games since she can steal her cousin Gameboy, with a passion for everything and anything mobile and video gaming. When she is not on the keyboard, she enjoys a long walk in the woods, in the seashore and in the city as well.